Now that some of my beautiful friends have moved to Riverside, they are helping me explore some of the restaurants in the area. I finally made it to Park Bench.  I got a little nervous as the Uber driver was getting closer and closer to the destination; it felt like we were getting further from the strip and well into the neighborhoods.  Turns out that’s what makes it a perfect spot; I can avoid the rowdy Fed Hill crowd.   I was expecting your classic Baltimore bar fare, but was pleasantly surprised when I saw the Hawaiian chef serving up sushi and some comfort foods from the island state.

We were super hungry, so dug into the spring rolls and dumplings before I could snap the pictures.  Both of these were good; however they tasted basically the same. Nice deviation from the traditional bar app menu of wings and nachos – which looked quite enticing.

It was flat bread night; but I don’t recommend those.  It tasted like your classic school lunch pizza – great deal for $5, but definitely not worth it for anything more. It’s a personal size pizza with a very thin kind of grilled crust.  it was called a three cheese pepperoni, but it seemed mostly basic red sauce, mozz and pepperoni.  There might have been some cheddar jack and parm, but I found it lacking. 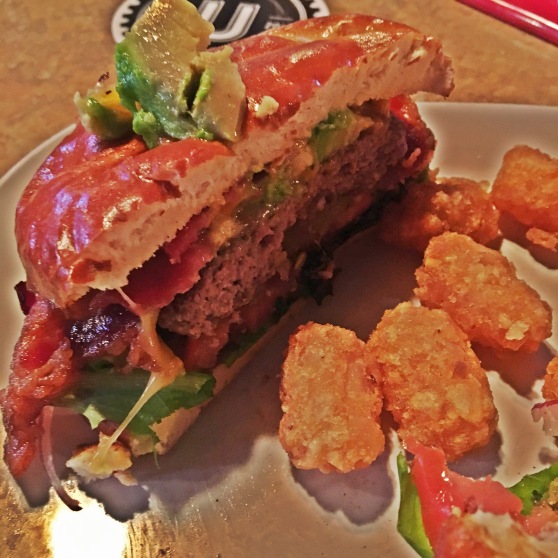 I do recommend the burgers.  I basically copied my friends order of a burger with bacon and avocado.  They have pretzel rolls, which was a nice addition, even though there was an up-charge.  Burger is fine, I am glad I had the toppings to add a little seasoning.  Mine was a little over cooked, but hit the spot, especially with the tots.

My friend had the Loco Moco, which gave me a little bit of dish envy.  They call it their Hawaiian comfort food. It’s a ginormous bowl of rice, topped with a hamburger, rich gravy and a fried egg.  So so much food.  I was comforted watching my friend dig in.